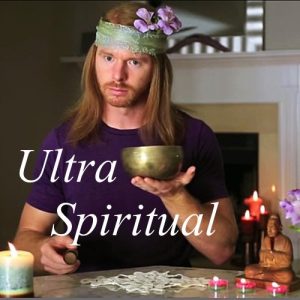 Have you ever encountered “Jerusalem Syndrome”?

The first time I ever met “Spiritual People” I went to a party in Westbury, a sleepy town in Wiltshire with one accolade, it’s where the White Horse on the side of the neighbouring hill resides.

Aside from that not much happens there. As such at 18 I was intrigued when I was going to a party that I was told was full of “cosmic” people who saw the world differently.

I’d spent years up till that point watching hours of videos, done research, read books, cross referenced and looked for the holes in information and had gotten to the conclusion that the world as we saw it.. in terms of what we were being presented with and what was actually going on truly were 2 completely different things.

When I got to the smallest terrace house you’ve ever seen and the smallest lounge with the most amount of people crammed into it. I couldn’t breathe for the weed and other drugs being smoked.

Within an hour I was bored. These people, as awake as they were to what was going on in the world and with the spiritual awakenings they’d experienced, were wearing it as an identity. Most of them didn’t have jobs or a regular source of income and although they had seen and experienced what most haven’t.. the conversation sat around things like:
“So how many times have you watched Zeitgeist Duke?”

My response was “A ton, but what does it matter. What are you going to do with the information?”

This lady looked at me slightly miffed that I’d even dared to ask her a question.

I left leaving my mate there.

Unfortunately I made a decision in that moment, that the truth I was looking for wasn’t to be found in spirituality, if that’s how they wanted to wear it as an identity rather than do something to change the world!

It was years later when at an event in London before I’d meet (what I’d call a “spiritual person” back then) anyone again who was “cosmic”.

She had a beautiful soul, but when I met her for the first time she started looking around my body and going on about my guides being present and not looking in my eye hardly at all. She seemed shot away and a complete air head. Her life was a mess in all areas and she seemed too have a complete shut off from reality and what actions needed to be taken.

Psychologists deem this term “extreme ego inflation”. When someone goes through an experience of connecting to source, God, The Universe, they then, instead of going with the flow and seeing it as an experience, they see it as clear the decks, “I’m Jesus Christ, move aside people!”.

Burning Man if you don’t know is a festival where there are a lot of such experiences. They recommend you don’t make any decisions until you’ve let it settle in for a month afterwards.

It’s HOW JP Sears has been able to tap into the true Wankiness that is ever present in this personal development world. It’s just a case of how long do people get stuck in this identity of what this new found information means to them!

Now Unfortunately as I’m sure you’re aware there are a lot of people who fall into this category within this personal/spiritual arena.

BUT THAT my friend is just judgement. Of where you were at and where you want others to be. I.e. Jerusalem Syndrome.

AND when you meet other people and they are still in this mode.

Just let them be. The fact that they can’t talk about what they’ve seen without breaking into a wry smile as they explain it, don’t let it annoy you, just let them be and know that at some point, further down the journey it will become #Standard to them.

One thing I’ve had a lot is people coming to me as clients who want to learn healing, but are discouraged by their own skeptical nature.

This I’m telling YOU is a positive not a negative.

The first time I started seeing Angels with my naked eye, I questioned their motives rather than getting carried away. The last time I did Ayhuascua, she was getting pissed off with me questioning her motives.

I’ll be honest, you don’t have to take it as far as I have, but my point is, always remain in question. Enjoy the experience, but then come back to every day life.

Yesterday I had the question in my Facebook group “Self Awareness with Duke”, asking how to know when you’re taking Ego action or soul led action.

THE SIMPLE answer is, you don’t. The more elaborate answer is you get better and better (also meditations in that group to help with this) at discerning the truth.

AND you want to know the quickest way to discern the truth?

Here’s 5 tips to keeping your feet on the ground while still taking action in alignment with your purpose.

1. QUESTION EVERYTHING. Question what someone says and what might behind the motivation to say what they’re saying. Question yourself, what you saw/felt and what it means to you?
Question why you are taking the action you are taking?

2. FEEL into your gut. Imagine you’re talking to your body as a 3rd person and ask your body: “How do I feel about this/that/what he’s saying?”

3. STOP JUDGING YOURSELF. Your skepticism is a BONUS. You’re a truth seeker, not a spiritual evangelist. AND STOP JUDGING OTHERS. Yes I know they’re wanky and are wearing the fact they can see/feel or pick up on things like a badge, but ask yourself “what part of you is judging them?”, then let it go.
They are on their journey and you are on yours.

If you can’t see/feel/hear anything yet outside of this 3D world, that’s ok too. Keep feeling into your gut and doing what you see is right and if it’s supposed to happen, it will come.

4. ASK to have God, The Universe, Source to enter your soul and physical body. Each morning spend 30 seconds and just imagine your highest potential coming into you. Ask to be infused with your purpose and the highest intentions for the good of all into you.

5. KEEP on with your truth seeking and know that there are those of us out there who do want a combination of seeing other realms and realities while at the same time living in a beach side apartment, without the worry of where the coming months rent will come from.

If you have an idea, a dream, a destiny… the only way you’re going to reach it is by taking action. Yes I visualise every day, release trauma and forgive every day, go into altered states every day.. etc..etc..

BUT The Universe wants YOU to make certain things happen on the planet and whether you’re sure of what your next step is or not, TAKE ACTION and keep checking in with your gut and your SOUL and The Universe won’t lead you astray. BUT ACTION is the first step!

P.S.
If you’re still skeptical of what spirituality means to you, maybe re-frame that term. I don’t call myself spiritual per say, I see myself as a seeker of truth. It just so happens that my truth is one of accessing others planes of reality, so that I can have more of what I want in this physical body and material world. That’s all. I’ve never been one to get too excited about what I see, except when I’m able to help get people in alignment with their purpose, see their own truth and WHY everything happened to them, so that they can have more of what they want in life also!

AND I Know you’re in it for the same reasons 😉

P.P.S Here’s to us all finding our own truth, however that shows up and however dumb it might look to others along the journey to getting there. XX