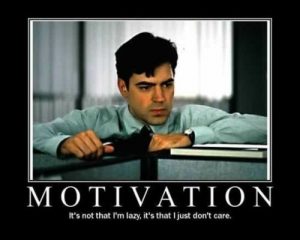 WOW that week flew by! 1 week off of Facebook and I have to say it felt amazing… BUT It feels eve more amazing to be back!

You see..
I’ve had a lot of people over the years say to me “it’s ok for you, you’re naturally motivated” and yes I won’t lie, I have a bit more energy than the average person and I don’t get bored of doing work….BUT it wasn’t always like that.

From about the age of 13 I struggled for motivation. For the first 2 years of school I was loving it and lapping up all the new learnings, but very quickly got subdued when in the 3rd year of school we seemed to be repeating the same old stuff.

By the time I had left school I hadn’t done any homework for about 2 years and how I got the GCSE’s I got I’ll never know.

By the time I was 19 I was pretty disheartened with what life looked like it had to offer. I was working part time at Wickes Building Supplies and every shift that I worked, I felt more and more the feeling that there must be another way to life.

When I wasn’t working I was mostly watching films and in a given week would often watch 10-20 films a week. I found the stories and characters fascinating.

There was one film though that had a profound effect on me. That was when I watched the iconic film Office Space (in the image).
In the film, the lead character Peter hates his soul-killing job at a software company called Initec.
He’s having relationship issues and goes to a hypnotherapist to get help. The hypnotherapist dies while Peter is still in an induced state of “not giving a f*ck”.

The next day he wakes up and for the first time ignores his alarm clock and his usual fear at his boss asking him to work extra hours.

NOW of course the film takes it to another level with how he shows up and how life as a result reflects back at him (I won’t ruin what happens in the film), BUT it hit me hard.

I worked harder and got more done then everyone else around me at work. I took shit from everyone and didn’t say anything in return.
I was going above and beyond the call of duty for my £3.18 per hour wages, as I was so eager to please (without even knowing that was the program) that I did everything that was asked of me and then some.

WHEN I watched Office Space, I saw my life flash before me and how everyone I’d ever met up until that point didn’t have the life I wanted. I knew I wanted different.

I had no Idea how, but I Knew there had to be more to life. I had struck gold.

In the film Peter ends up with so much more then he bargains for with his honesty and not giving a f*ck attitude before then losing it all and learning his lesson, that he just wants the simple life and to feel awesome each day…

It wasn’t about how much money you made, or your status at work, or what your boss said to you…

BUT HOW YOU FEEL from day to day

LAST WEEK I took a week off.

I had a ton of things going on with the latest launch of Experiential Healing and new the participants, moving house, my daughters mum starting a new job..and a ton of other things..

Many thought I must have overhwlem

BUT It was none that…

The way I see it, is there are 2 fundamental aspects of motivation:

Number 1: What I learned from that film and have continually got better at year on year is the ability to put how I feel first

It’s not always easy. BUT the more you do it, the better you get at noticing when you’re noticing something showing up in your world doesn’t make you feel good

THE REASON I’m able to work so hard and help so many people without wanting anything in return, is because I top myself up first

I know my values.

The reason I got bored at school and struggle to motivate myself, was because I stopped learning.. and that goes against my most intrinsic of values.. personal growth.

SO… if you’re ever struggling to motivate yourself… do the following:

1. When you wake up, straight away, ask yourself “how do I feel right now?” and do conscious breathing.

2. Continually throughout the day ask yourself how you feel, especially before during and after a meal (simple shortcut to start to tune into your body and your feelings with food) and do 10 conscious breaths 3 times per day as a starting point.

3. Ge to know what’s important to you. It doesn’t matter whether you’re working as an accountant or a coach.. if your values aren’t being met, you’re not going to feel motivated

4. Take time out for YOU. I see it time and time again, coaches, healers and people who help that have the most amazing hearts, but they feel some resent or “what about me” at some point… This stops you from being able to help consistently. Don’t wait till it’s too late, schedule in at least half a day a week and at least 30 mins per day that is time just for you.

5. Focus in on the feeling. It’s not about where you get to or where you’re going… it’s about how you feel and the experiences and themes your soul gets to experience along the way. Whatever you think you want, be sure to check in with how you want to feel.. and follow that. Only then will you be happy and at peace wherever you are in life.

THE MOTIVATION will flow through you in the form of inspiration.

P.S. All last week I was feeling good. I just didn’t have the time while I changed some things in the business. I had to know my priorities while I stopped some aspects and focused on others. AND without any warning, this morning I woke up feeling super in flow and buzzy… that’s how life is supposed to feel. You shouldn’t need to beat yourself to get out of bed… find you and you’ll soon find your purpose and motivation.