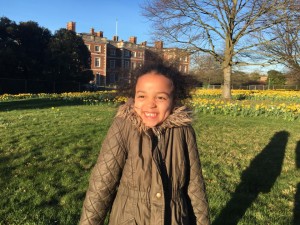 This is us at Trent Park in Cockfosters.
This morning though, SHE looked up at me and said “Daddy I know you don’t love me”

I said “how can you say that?”

I said “what makes you say that?”

“Mummy told me” was the reply

What would you have said in response?

Rather then my original plan of a book that shares the tools and techniques I use for awareness, the shift has now focussed to a book on my story and how I finally managed to forgive.

It’s a completely different ball game writing about your life rather than recommendations on how to live it. Mostly because you have to show and outline Why things happen to you to the reader.
What’s fascinating is that although I’ve released and integrated a lot, writing a book on every nitty gritty detail has brought up even more Awareness and connections on WHY things happened.

Now I always knew that my daughter being born was the start of everything, but mapping out the book and all the relevant trigger points made me realise how much even more so of a tipping point Luyana being born has been!

I struggled to forgive her mum for many things..

Not letting me see Luyana…

admitting to setting out to trap me

Constantly telling Luyana from an early age how “bad” I was

Even with all the stuff that was going on and the lack of cooperation for me to be able see Luyana, especially with her living in another country..

THE HATE I FELT TOWARDS MY DAUGHTERS MUM still wasn’t justified..

Once I’d released my own experiences and the fear that my daughter would grow up with the same feeling of not being loved..

THE Hate VANISHED..immediately, never to return…

It doesn’t mean to say there won’t be moments and parts of Luyanas journey that still need to play out as a result of the experiences and decisions me and her mum made 7 years ago,

but what it does mean, is that I can be 100% present to the present and not let anything that has gone before effect how I act now with my daughter..

EVEN when she brings up something that was created before I got wise and shit :-p

The forgiveness took longer however

AND that was when I forgave the parts in myself and my actions, in my life and my experiences

If you’re struggling to forgive someone..

Once you have awareness around WHY they are showing up the way they are,

BUT for now she’s on her journey and all I can do is do the best by her and know that she is living her own experience and work on myself to make sure that my interaction and experience as it relates to her..

Luyanas mum is also on her own journey, but if I held onto the past, (as someone once said), it’s like taking poison and expecting the other person to die

Then I sent a quick text letting her mum know what had been said, but that “you may have said these things in the past (although in frustration she still does sometimes) and I want to make you AwAre in case it ever comes up again, this is what I said”

P.S it would have been so easy to bitch and complain and point the finger. What’s your motive when you do this? It’s your own shit and has nothing to do with your child

Just know that whatever happened, happened for a reason and whatever part of them felt the need to do what you see as what a parent shouldn’t do.. was just a part of them unforgiven, unresolved..unacknowledged

When you’re able to forgive yourself, people and everything around you, you enable yourself to be free and truly live in the present.

I remember feeling rage towards my daughters mum not too many years ago. Didn’t know what that emotion was till I experienced it.

It hurt what Luyana said for about 10 seconds. Although it was more surprise and shock. Then I got back to being in the present and being there for her. I felt no anger or frustration towards her mum and myself and Luyana had an amazing day with nothing of what was said first thing in the morning having any bearing on what happened throughout the rest of the day.. other than this post :-p

Have an amazing weekend people